The Future of Universities

The tenth set of articles from The Future of Universities Thoughtbook | Universities During Times of Crisis introduces Global Lead for Tertiary Education at the World Bank, Roberta Malee Bassett, President and Vice-Chancellor of the University of British Columbia, Santa J. Ono, and Head for Intellectual Property and Technology Transfer at the European Commission, Giancarlo Caratti.

In her article ‘The Future of Universities – The Emergence of the Omniversity’, Roberta Malee Bassett envisions the emergence of the omniversity, a transcendent enterprise of global education reach and impact, taking away borders and limits to its academic mission and instead emerging as ‘more agile, more accessible, and more meaningful’.

In his article ‘IMAGINE a New Network of Research Universities Partnering to Solve Global Grand Challenges’, Santa J. Ono describes how an interdisciplinary global network of universities could partner to collectively solve global challenges through education and research, embracing values such as integrity, openness, tolerance and global citizenship.

In his article ‘Knowledge Transfer Metrics: Towards a Europe-Wide Set of Harmonised Indicators’, Giancarlo Caratti discusses shared common indicators to track progress in knowledge transfer that will allow institutions to benchmark themselves against their peers. He imagines a wide range of internationally adopted indicators that go beyond the traditional measures and include research collaboration and other “non-academic” users and engagers. 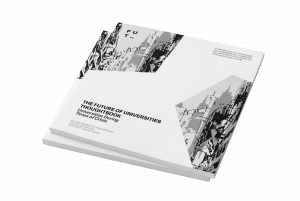 Header photo by NASA on Unsplash.